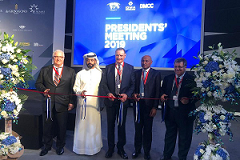 There was a time, though not very recent, when a gathering of the World Federation of Diamond Bourses (WFDB) was graced by royalty and high-ranking politicians, recalled industry consultant Peter Meeus at the organization’s annual Presidents’ Meeting that took place late September in Dubai.

“Can we bring back the old days when kings and queens were honoring international [diamond] events with their presence?” asked Meeus, who in the past has worked in various capacities in the Antwerp and Dubai trades.

He was really asking the question the WFDB had tasked him to assess: What is the organization’s role in today’s market? And why has it lost its appeal, particularly among young diamantaires?

Part of the challenge, he explained, is that newer organizations have taken on some of the functions the WFDB used to fill.

For example, the purpose of the Responsible Jewellery Council (RJC) is to set standards of due diligence in the trade, while the mission of the Diamond Producers Association (DPA) is to promote natural diamonds and defend the industry against threats such as synthetics. The World Jewellery Confederation (CIBJO) oversees rules to harmonize jewelry trading and the World Diamond Council (WDC) represents the trade at the Kimberley Process.

While it can be argued those were never the central functions of the bourses, Meeus notes they have diluted the WFDB’s overall mandate.

What sets the WFDB apart, however, is its breadth. With 30,000 members across 29 affiliated bourses, it is still the largest organization representing the diamond midstream, Meeus stressed.

That’s a tremendous responsibility given the trade is going through one of the most challenging periods it has seen in many years, as WFDB president Ernie Blom noted in his opening address to the annual gathering. The midstream faces a lack of profitability and a credit squeeze, and there is an oversupply of polished in the market. At the same time, jewelry sales are being hit by global uncertainties such as the US-China trade war, protests in Hong Kong, fluctuating stock markets and volatile exchange rates, he explained.

The midstream needs strong representation and leadership in such an environment. But the WFDB has its limitations. Unlike those other organizations, it is driven by volunteers, and has a small permanent staff and a very limited budget, Meeus observed.

Beyond its macro goal of representing the midstream, the WFDB’s best-known mandate is to implement disciplinary sanctions and carry out arbitration between disputing members.

“A major part of the strength of the WFDB is that it can eject diamantaires who do not abide by the rules,” Blom explained. “When they are kicked out, they cannot trade in any of our 29 bourses — and that is the ultimate punishment.”

But with depleting participation among members, and somewhat older and male-dominated committees across all bourses, the board is now asking if its disciplinary role is enough to move the WFDB forward.

“We think arbitration is the most important function of the WFDB, but it’s not enough for the next generation,” cautioned Rami Baron, president of the Diamond Dealers Club of Australia and head of the WFDB’s promotions committee.

To tackle the question and understand where the WFDB’s strengths and weaknesses lie, Meeus surveyed 20 diamond-exchange executives on 22 bourse-related issues. The results signaled that the WFDB is not perceived as the true representative of the midstream, he concluded.

The opportunities, according to the survey, lie in the WFDB taking a leadership role on issues of compliance, implementation of know-your-customer (KYC) programs, executing disciplinary action, harnessing the international network that it fosters, promoting the industry's history, and encouraging communication among members. And while facilitating trading-floor activity is considered a strength, along with the secretariat structure of the organization, the executives see the floor as the least important aspect of the bourses’ mandate. The trading floor, which used to be the center of diamond-trade activity, has lost some relevance in the past decade as business has moved online.

Meanwhile, the areas in which the WFDB performed worst — in the view of bourse executives — related to its education initiatives, bringing in new members, filling its arbitration function, and collaborating with other trade bodies.

The survey was by no means a gloomy representation of the WFDB. If anything, it is encouraging that the organization is aware of its predicament. The WFDB can also draw on some exciting initiatives that should contribute to its reinvention.

The Young Diamantaires group, for example, has developed into a powerful networking opportunity for diamond entrepreneurs below age 40. In September, it facilitated a visit to De Beers’ Venetia mine and community outreach programs in South Africa, with 25 professionals across the industry spectrum participating from around the world. The idea, explained convener Rami Baron, is to encourage an exchange of ideas, without pushing any agenda. Awareness of the WFDB becomes an important side-benefit, he noted.

Looking around the room of the Presidents’ Meeting, there was an unspoken recognition that the organization needs that injection of young blood. And it needs to bring women into its ranks, with hardly a female representative on the executives of either the WFDB or sister organization the International Diamond Manufacturers Association (IDMA), which held its annual meeting concurrently in Dubai.

Having done the initial analysis, the challenge now lies in developing a successful strategy to move the WFDB forward. Meeus is working on a plan that will likely be presented at the next executive-committee meeting in Japan during the first quarter.

He might be mindful that as the largest trade representative, the WFDB doesn’t need to attract kings and queens. It just needs to energize the average diamantaire.