Was Vegas Worth the Gamble? 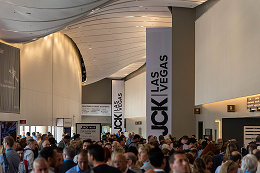 As rain fell for about five minutes on the typically sunbaked Las Vegas strip on the opening day of the JCK show, one couldn’t help but sense things might be a bit different this year. Was the unusual weather a sign that diamond dealers were in for similar positive surprises on the trading floor? After all, they had endured difficult market conditions in the past 12 months and could do with a little pick-me-up.

In the end, the show met traders’ low expectations, with the Las Vegas jewelry week doing little to boost sentiment. It reflected robust US jewelry demand but a challenging global diamond-trading environment that has been prevalent for some time. Ultimately, the 2019 Las Vegas experience will be remembered for its relatively cool weather, the hot US political climate and, at best, lukewarm market conditions.

However, amid the cautious trading some important themes emerged that will likely dominate the conversation within the trade in the coming year. Here are five key observations that we took from our time in Vegas this year:

1. There’s No Business in Show Business

There was a clear drop in visitor traffic and exhibitor numbers at JCK this year compared to 2018 — although the change in venue to the Sands Expo and Convention Center made for a difficult comparison.

Overall, attendees were pleased with the new location, noting that the Sands is easier to navigate than the Mandalay Bay venue where the show was held in previous years. That helped lift the mood even as it took a short time to familiarize with the new surroundings.

When it came to trading, the diamond section was quiet, with a noted decline in inter-dealer trading. “The show is about relationships and engagement, not necessarily sales,” stressed Nilesh Chhabria, chief operating officer of Finestar Jewellery & Diamond, a Mumbai-based supplier. “There’s been a drop-in attendance, but the US is still doing good numbers, and there were orders to be made if you have the right goods.”

There was steady demand for 0.60- to 1.99-carat, I to J, VS to SI diamonds that are typical “American” goods. Other categories were relatively weak, following the trend seen in the past year.

Those who prepared for the show and made appointments did reasonably well, added Rahul Jauhari, senior vice president of global sales and marketing at India-based manufacturer Star Rays. “Appointments showed up,” he noted.

Still, many questioned whether attending the event was worth the investment, given the lull in actual sales at the show. Besides, many pointed out, with the focus of trading now online, dealers have easy access to suppliers and buyers.

Diamantaires are not seeing the same value in attending the shows as they did in the past. It largely depends on one’s goals at the various events. As an Israeli colored-diamond dealer observed, “I stopped exhibiting here a while ago. Hong Kong is more of a transaction show. Vegas is about networking. I come to Vegas with my backpack and business cards.”

2. Midstream Technology Is Having a Moment

With fewer transactions taking effect, more diamond exhibitors focused on demonstrating their added value. Diamantaires and wholesalers are emphasizing that it’s not just about the goods in inventory and tried to woo customers through a variety of innovations that were on display.

Dharmanandan Diamonds highlighted its Love Facets collection, which includes the Sirius Star and Padma cut by acclaimed master cutter Mike Botha. The company effectively explained the unique symmetry of the patented cuts with a laser display unit that demonstrated the light distribution of the stone.

Online jeweler Ritani is tapping into a desire among retailers to hold less inventory in their stores, with the launch of its “Virtual Shelf” platform at the show. The program enables retailers to access a digital inventory of hundreds of thousands of diamonds and jewelry pieces that are available for purchase through an iPad used in the store. The jeweler can use its own branding on the application and companies can also use the platform to list and sell their own inventory to other participating jewelers.

Others used the show to demonstrate their use of technology when selling a diamond online. Finestar has developed its X-Ray solution to provide more accurate information about the diamond. Using a click-and-drag function that overlaps the digital image of the stone with the plotting image provided on the Gemological Institute of America (GIA) report, X-ray shows where the inclusions are on the diamond.

Further examples of companies showcasing technology centered around proving traceability in their supply chains. More diamond manufacturers are developing such capabilities, as the market has recognized a need to differentiate ethically sourced products.

Those diamonds should sell for a higher price, claimed participants in Rapaport’s Town Hall meeting on ethical supply. Meanwhile, one manufacturer exhibiting at JCK said his company was considering charging extra for the provenance information and marketing materials that come with it, to cover the cost of developing the program. He’s hoping other suppliers will follow suit.

Marketing the sustainability of diamonds extends beyond traceability. The industry drove home the message in Las Vegas that it needs to tell the story more effectively about the positive impact diamonds have on communities.

Three marquee events at the show emphasized the point: Botswana President Mokgweetsi Masisi gave the keynote opening address at the show, highlighting the role diamonds have played in his country’s growth, while his wife Neo Jane Masisi told her personal story of diamond development at the Forevermark breakfast. The GIA subsequently hosted a panel discussion in which Swarovski, Ben Bridge Jeweler, Kering and Okavango Diamond Company presented their corporate social responsibility programs.

“Many consumers want beautiful jewelry, but they also want assurances their purchases are free from the taint of bloodshed or environmental damage,” said GIA CEO and president Susan Jacques. “More than that, the gem and jewelry-buying public want to see that their purchase actively contributes to the betterment of society, from the mine to the market.”

We must demonstrate the tremendous good work that is being done by so many across the pipeline to eradicate the misconceptions about our industry, she added.

4. Synthetics Are Growing, but the Message Is Changing

Already, telling those stories seems to be paying off, as sellers of synthetic diamonds are shying away from marketing their product as a more ethical alternative to mined diamonds. It’s a mistake to present lab-grown diamonds as a greener option, Dror Yehuda, president of Yehuda Diamonds, which developed the Sherlock Holmes synthetics-detection device, said in a panel discussion.

Yehuda noted that growers didn’t need to use the ethical claim to sell their product, since there is a real demand among consumers. “Lab-grown has transformed from finding its place in the market to a growth phase,” added fellow panelist Leon Peres, CEO of Green Rocks Diamonds.

More retailers are carrying synthetic-diamond jewelry, and there was a rise in the number of exhibitors in the lab-grown section of the JCK show.

For its part, the natural-diamond industry is urging retailers to disclose to consumers that the value of lab-grown will likely decline as supply increases.

If it doesn’t make those disclosures, synthetics will undermine the diamond dream, particularly when it comes to engagement rings, stressed Martin Rapaport, Chairman of the Rapaport Group.

A number of big brands, such as Swarovksi, have focused on engagement rings in their lab-grown offering. But it’s not just the threat of synthetics that is challenging the bridal category, as the average price of an engagement ring has declined in recent years, several suppliers at the JCK show observed.

Bridal accounts for about 26% of diamond-jewelry sales in the US, but the category is softening, noted Charles Stanley, US president of Forevermark, which is focusing its marketing campaign this year on the category with its Engagement & Commitment collection.

That may be because millennials have a different attitude to marriage than previous generations. A formal commitment is no longer a necessity and often comes after other milestones such as having children, he continued. Couples are deciding to get married with a different set of considerations than in the past, and they’re spending less on the ring because they have to balance other expenses, Stanley added.

Bridal is narrowing down, and a lot of collections are looking the same, noted one exhibitor in the JCK Luxury hall who requested anonymity. “Millennial consumers are moving to a more simple, petite design, and they’re retreating to price points,” he added.

For many at the show, the challenge was to transcend price and demonstrate the added value in their goods and services. It seems the measure of success in Las Vegas lay in a company’s ability to attract jewelers to engage with their marketing and tech platforms moving forward, rather than pure selling.

Whether that’s enough to make the trip again next year is a question many diamond dealers were asking. At the very least, Las Vegas remains a unique opportunity to gauge the industry’s dynamic.