Previous ALROSA’s 14.83 Ct Spirit Of The Rose May Become One Of The World’s Most Expensive Diamonds Next Trade Seeks Discount For Hong Kong Show
Newsletter 17.08.2019 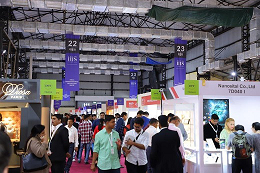 India’s diamond and jewelry trade is hoping to take market share from Chinese suppliers after the US government announced a hike on import duties from China.

There’s a changing world order and India is well placed to capitalize on these changes, stressed Pramod Agrawal, chairman of the Gem & Jewellery Export Promotion Council (GJEPC), at the opening of the India International Jewellery Show (IIJS) Premiere in Mumbai over the weekend.

In July, US President Donald Trump announced a 10% tariff on $300 billion worth of goods imported from China, including diamonds and jewelry, which will go into effect on September 1. With China’s jewelry shipments to the US valued at $13.3 billion last year, Agrawal sees potential for India to “grab” a “$6 billion opportunity” as US jewelers will want to source their goods elsewhere.

India is looking to the US as well as Asian markets to boost its gem and jewelry exports to $75 billion per annum by 2025, from around $40 billion in the fiscal year that ended March 31, 2019. The country is in negotiations to implement a free trade agreement with 10 countries that make up the Association of Southeast Asian Nations (ASEAN), which Agrawal expects will help the jewelry trade reach its goal.

However, the focus at IIJS was on the domestic market as jewelers started to prepare their orders for the festive and wedding season, which culminates in the Diwali holiday on October 27.

Sentiment at the show was better than expected, with steady foot traffic during the five-day event. A total 32,461 local and 1,167 international visitors attended the event, reported organizer GJEPC.

While there was strong interest from buyers, the orders were restrained due to the rise in gold prices in August, the depreciation of the rupee, and after the government last month raised the import duty on gold and precious metals from 10% to 12.5%. Spot gold in rupee terms is currently trading at around INR 35,000 per 10 grams, up 9% in August and by 18% since the beginning of the year.

Many jewelry buyers at IIJS were assessing availability and waiting for gold prices to come down before placing their final orders, exhibitors noted. Some expect those orders to be made soon as they project gold will peak at the INR 40,000 level. “Jewelers are stocking up with that psychological level in mind,” explained one CEO of a gold-jewelry distributor exhibiting at the show.

The focus of the show remains on gold and finished jewelry, with less of an emphasis on loose-diamond trading, reflecting the makeup of the local retail market. Many of the larger diamond manufacturers presented in the finished-jewelry section.

Diamantaires were more concerned about the upcoming September Hong Kong Jewellery & Gem Fair, which is usually an important barometer for diamond demand before the US and Chinese holiday seasons. Organizers have confirmed the show will go ahead, although there is rising concern about the political protests taking place in the city, as reported by Rapaport News.

A decline in Chinese demand has affected India’s diamond exports in the past year, particularly demand for 0.20- to 0.60-carat goods, which are popular in that market, explained one diamond manufacturer at IIJS.

“There’s a lot of pressure on these goods, and prices have dropped,” he explained. “Manufacturers have reduced polished production and will maintain lower output until China wakes up.”

Meanwhile, the industry is trying to boost diamond demand among Indian consumers, to complement the strong gold-jewelry tradition in the country.

Jewelers at IIJS tried to strike a balance between Western and traditional Indian in their designs. While Indian millennials are trending toward lighter, Western-style diamond jewelry, particularly in their self-purchases and fashion pieces, there is still an emphasis on tradition for occasions. Among the larger brands, Forevermark is pushing its Traditional Setting Collection in southern India where the heritage includes diamonds in a closed gold setting, a company representative explained.

The mix of gold and diamonds is also prevalent in the Diamond Producers Association’s (DPA) “New Moms” campaign, which it launched in April, promoting a “half-diamond” bracelet as a gift to mothers who have just given birth.

“The idea is to create a new product category and build on the tradition of giving a gift on such special occasions,” explained Richa Singh, managing director of the DPA India. “This is a call to action to buy diamonds that resonates with all retailers in all regions.”

Having the design encompass diamonds across half of the bangle while maintaining a strong visibility of gold was deliberate because the metal still has auspicious meaning in India, Singh added.

Some 21 jewelers with approximately 510 retail doors had signed up to the campaign prior to IIJS, with more interest generated at the show, she said. The DPA provides the marketing material and some guidance on design, leaving the retailer to develop the product and personalize the campaign according to its needs.

The bangle was chosen for its strong symbolism among Indian women, representing the completeness of the family, Singh explained.

India has among the fastest-growing populations in the world, and Singh cited United Nations International Children’s Emergency Fund (UNICEF) data from 2012 claiming 70,000 babies are born each day in the country, on average. Furthermore, there are 10 million weddings each year, she added, quoting a 2013 survey conducted by the BBC. “We recognize the central role that gold plays in these important occasions. We want diamonds to build on that tradition,” Singh added.