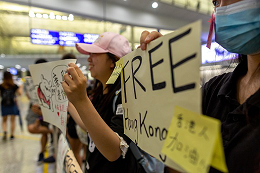 The Hong Kong Jewelry Manufacturers’ Association (HKJMA) is asking the organizers of the September show for a 25% discount for its members, citing difficult market conditions due to the trade war and social unrest in the city.

Many overseas exhibitors and buyers are likely to skip the Hong Kong Jewellery & Gem Fair following government warnings about visiting the municipality, the HKJMA said this week. Domestic companies have also expressed “anxiety” about the event, with some stating they might not attend in order to minimize losses, Wings Cheung, the association’s general manager, wrote in a note to members.

“This is the most challenging time for Hong Kong’s jewelry sector since the financial crisis,” Cheung stressed.

The group will meet with Informa, the coordinators of the show, to propose a reduction in exhibitors’ fees. It will also request lower prices for next year’s June and September shows, which Informa organizes, and will have similar discussions with the Hong Kong Trade Development Council (HKTDC), which operates the March fair.

The show is still due to take place from September 16 to 22 as planned, Informa told Rapaport News last week. “We are closely monitoring the situation following recent public incidents at Hong Kong International Airport,” the company added Wednesday. “We are, however, hopeful that the situation will calm down.”

The airport is the primary entry point for visitors to Hong Kong, as well as being adjacent to AsiaWorld-Expo, which is scheduled to host the show’s loose-diamond exhibition. Demonstrators and police officers have also clashed near the Hong Kong Convention & Exhibition Centre in the Wan Chai district, the venue for the finished-jewelry section.

As unrest in Hong Kong escalated this week, the association advised its members to show extra financial prudence, and to take special care with overseas travel. Its chairman, Benny Do, has asked the Commerce and Economic Development Bureau, the Hong Kong Export Credit Insurance Corporation and the Federation of Hong Kong Industries for a meeting to discuss the challenges.

The group has also canceled the November Miss Jewelry Hong Kong 2019 pageant to save costs ahead of the JMA Hong Kong International Jewelry Show, which begins November 28.

Diamond and jewelry demand softened in the region even before the protests started, Cheung noted, as the trade dispute between the US and China has impacted sales over the past year. US President Donald Trump’s recent addition of a 10% tariff on many Chinese goods, starting September 1, has worsened the situation, he added.

Neither Informa nor the HKTDC had not responded to a request for comment about fees at press time.