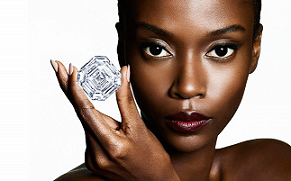 The Graff Lesedi La Rona weighs an awe-inspiring 302.37 carats and is a top D color, with exceptional clarity and both excellent polish and symmetry. The 302.37 carat Graff Lesedi La Rona is touted as the largest highest color, highest clarity diamond ever certified by the GIA, and the world’s largest square emerald cut diamond, expertly cut and polished by Graff’s world leading team of gemmologists and master polishers - a group from Antwerp.

Cut from the largest rough diamond unearthed in a century and the second largest ever recovered, the 1,109 carat Lesedi La Rona - recovered by Lucara Diamond at the Karowe mine in Botswana and purchased in September 2017 by Laurence Graff for $53 million - it is the principle diamond among the polished stones crafted from the orginal rough diamond, which also yielded 66 beautiful “satellite” diamonds ranging in size from under a carat to in excess of 100 carats.

The sheer size of the diamond posed a challenge for the Graff gemologists tasked with analyzing, cutting, and finishing the stone: It was too big for their equipment. A special resin had to be use to hold the stone in the tang. A new scanner had to be built specifically for this rough diamond; it is equipped with specialized imaging software to map the stone and determine what kind of cut would lead to the largest, most brilliant diamond. The entire process took more than 18 months, according to the company, and had to be planned and executed to perfection.