Synthetics: Coming to a Bourse Near You? 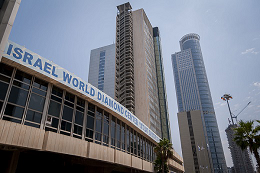 Exchanges in Mumbai, Dubai and now Israel are dipping their toes in the water.

The rise of lab-grown diamonds might finally be trickling through to the historic heart of the trade: the diamond exchanges.

It began last November, when Anoop Mehta, president of Mumbai’s Bharat Diamond Bourse (BDB), told Rapaport News some of its members had asked for a rethink of its total ban on synthetics in the complex. The BDB delayed taking action due to “issues” in the market in the last six to eight months, but could hold a vote later this year, Mehta said Tuesday.

Meanwhile, the Dubai Diamond Exchange hosted a tender of rough synthetic diamonds earlier this week — the first of its kind at any member of the World Federation of Diamond Bourses (WFDB).

And in a Hebrew Facebook post on May 7, Yoram Dvash, president of the Israel Diamond Exchange (IDE), announced he had sat down with senior bourse members to discuss how to approach the lab-grown question.

But the opportunities in synthetics go beyond just one client. The category has made headway in the US, though demand is less strong in Europe and the Far East, participants at Dvash’s May 6 gathering concluded. There were voices for and voices against entering the market, he reported, with some arguing that promoting man-made stones would damage the natural market.

It’s not clear what form any Israeli market entry would take. The bourse currently bans lab-grown diamonds from its IDE trading floor, and has no plans to change that, Dvash said. It doesn’t monitor what goes on in companies’ offices within the rest of the exchange building.

“Other members felt we must join [James Allen] in carrying synthetic stones,” he wrote. “A decision was made to continue to investigate the issue more deeply, and to hold a further discussion in the near future.”

In the meantime, the IDE plans to tighten its rules to ensure that any activity in lab-grown diamonds doesn’t lead to undisclosed mixing with natural stones. It wants traders to put a clear mark on the small envelopes for diamonds (commonly called “brifkas”) to indicate that a stone is synthetic, as well as on invoices, Dvash explained. The bourse will also allocate part of its budget to improve segregation of the two markets. The exchange has approved the budget, and is waiting for its legal committee to finalize the other two provisions.

Bourses have the autonomy to make decisions on these issues themselves, so long as they ensure clear differentiation and ethical marketing, noted Ernie Blom, president of the World Federation of Diamond Bourses (WFDB). Recent actions by the US Federal Trade Commission and the Diamond Producers Association have successfully alleviated many of the concerns about lab-grown producers misleading the public with their marketing, he added.

“[Bourses] have the right to decide if they want to have lab-grown diamonds on their bourses or not,” Blom said. “Whatever their decision is, we will basically support it.”

That gives the diamond bourses freedom to pursue ventures that benefit their members. The question that remains is whether that will result in the introduction of synthetics to the trading floor, thus entrenching the product in the industry’s core.