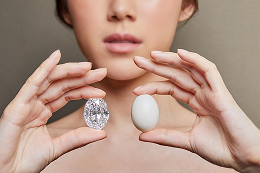 The 'Spectacular 88.22-Carat Oval Diamond', said to be perfect according to every critical criterion, sells at the Sotheby's Hong Kong auction for HK$108 million/US$13.8 million to a Japanese private collector who names the stone the 'Manami Star', after his eldest daughter. The auction house expected the oval-cut gem to fetch as much as HK$100 million (about US$12.7 million), but they underestimated the allure of the lucky number 88 - a symbol of perfection and eternity, often associated with prosperity, the number eight is considered a lucky number in China and other Asian cultures.

The stone is one of only three oval-cut diamonds with a weight greater than 50 carats to appear at auction in living memory, and the largest to be auctioned in over five years. “Three clients from the region competed for the stone — testament to the strong demand for diamonds of this quality in this part of the world” Patti Wong, Chairman of Sotheby’s Asia. The 242-carat rough stone which yielded the diamond was discovered at the Jwaneng mine in Botswana, a mine owned in partnership by De Beers and the government of Botswana. Following its discovery, the rough was cut and polished over a period of intense months to produce a symmetrical and striking oval brilliant diamond. “When you think that one ton of mined earth yields less than a carat of diamond, and that high quality diamonds over 10 carats are a rarity, the discovery of a 242-carat rough, of gem quality and exceptional size, is nothing short of a miracle," Wong added.