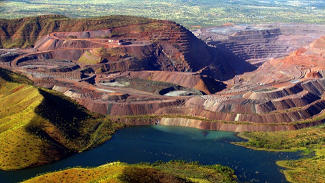 The miner commented that, "The global supply of natural rough diamonds in 2018 was lower than 2017. We expect this trend to continue into 2019, as new sources of supply are unable to satisfy growing demand. We saw a reduction in miners inventories over the first half of the year, coinciding with improved prices. However, in the latter part of 2018 there was an increase in inventories, predominantly of lower quality rough diamonds. This led to a softening of prices, particularly in lower-end categories."

Image: Argyle mine, courtesy of The West Australian
Source: The Diamond Loupe
Back To List