Pressure On Diamond Midstream To Increase 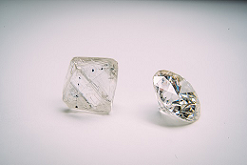 Diamond manufacturers will consolidate in the coming years to avoid being further squeezed by miners and retailers, Bain & Company predicted in its annual report on the industry.

The forecast stems from the midstream becoming an increasingly weak part of the supply chain while retailers and rough producers have improved efficiency. This has resulted in manufacturers becoming “price-takers,” forced to accept sale conditions that more powerful parties have dictated, Bain partner Olya Linde said Tuesday in an interview with Rapaport News.

Retailers are increasingly demanding goods on memo and using e-commerce options to minimize their inventory, Linde explained. At the same time, weak consumer demand and lower diamond content in jewelry have reduced cutters’ revenues, she said. Midstream polished sales dropped 10% to 15% in 2019, while operating margins fell 2% to 3%, Bain estimated in the report, published Wednesday.

“If you look at the structure of the diamond pipeline, there is consolidation in retail, with companies becoming bigger and having bigger purchasing power,” noted Linde, who co-authored the report. “They can dictate a lot of conditions. The rough-diamond portion is also fairly consolidated, but the midstream is very fragmented. Therefore, they have limited ability to enjoy the benefits of scale that could bring efficiencies and create better margins.”

This pressure could lead to “long-overdue” restructuring and consolidation in the midstream, she said. “There are diamantaires that…have built scale. I think that will continue to happen, and the more successful and more innovative [companies] will probably end up winning.”

Meanwhile, a slump in bank lending has contributed to lower liquidity in the cutting sector. Available financing has dropped by $5 billion, or 30%, since 2013 — with $2 billion of that decline occurring in the past two years, Linde noted. As access to affordable financing became harder, cutters and polishers reduced their rough purchases by around 30% this year to help work down inventory and improve cash flow, according to her report.

While Bain does not predict an increase in lending in the short term, it sees alternative financing options as a potential source of liquidity. Hedge funds and other players are selling structured products that guarantee stable costs over the financing period, it reported. Banks in the Middle East are offering additional financing options as traditional lenders in India, Belgium and Israel move away from the diamond industry. Furthermore, investment funds with large amounts of capital are looking closely at the diamond trade, Linde noted.

“This story of a gap in financing is one that is attractive to many, and they’re definitely exploring the opportunity,” she pointed out. “The biggest question is obviously valuation of diamonds and how you valuate inventory, and how you make sure the loans are guaranteed.”

The other major cloud over the industry, excess inventory in the manufacturing sector, will begin to dissipate next year, according to the Bain report. However, an imbalance will remain, preventing a full recovery. This will be exacerbated by reduced financing, insufficient supply cuts by miners, and sluggish retail growth, it said.

Industry downturns resulting from internal pipeline inefficiencies tend to last longer than those related to macroeconomic recessions, Bain noted. In the case of the current slump, more breathing room will appear in 2021 as the Argyle mine in Australia closes and production falls at the Diavik and Ekati deposits in Canada.

“The industry’s first and strongest opportunity to rebalance and regain growth will be 2021,” the report concluded. “Rough-diamond supply is projected to decrease about 8%, and macroeconomic indicators are expected to improve if the global recession is short-lived.”