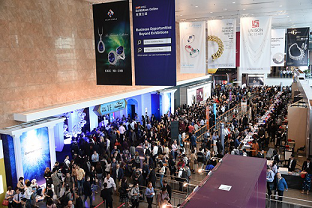 Dealers at the Hong Kong International Diamond, Gem & Pearl Show expressed concerns about sluggish polished demand and an oversupply of goods in the wholesale segment.

Inventory moved slowly despite busy traffic at the fair, which began this week, people who attended the event told Rapaport News.

"The mood looks OK, but conversion [to sales] still hasn't happened," said Rahul Jauhari, senior vice president of global sales and marketing at India-based trading firm StarRays. "Not that we're not happy with the result, but it could be better."

The exhibition still produced a better outcome than the September 2018 show, when activity suffered as a result of a major typhoon and religious holidays, Jauhari added. However, continuing challenges in India have dulled trading, he noted.

A surplus of lower-value polished has spooked the market, with attendees bringing a large volume of goods to the exhibition. The number of stones on the RapNet Show Listings service, an electronic catalog of inventory, grew to a record 160,000 for the Hong Kong event, compared with the usual 100,000 to 130,000.

Worries increased this week after more than 100,000 carats of melee diamonds became available in Mumbai, driving prices of those goods down 30%, The Times of India reported Thursday. That was sparked by the offloading of goods by people connected to the late former chief minister of the Indian state of Tamil Nadu, Jayaram Jayalalithaa. In 2016, shortly before her death, she bought over 200,000 carats of goods in a size category known as +11 in the wake of the government's demonetization policy, the newspaper said.

"That just made things a bit worse," Jauhari explained, noting that diamonds below a carat had already been in surplus in recent months. "Psychologically [when an offloading event happens], retailers start thinking prices are going down, so it indirectly affects other categories as well - they start asking for crazy prices in other categories as well."

Demand for larger goods was slow, according to Dotan Meirov, chief operating officer at Israel-based MID House of Diamonds. He noted a strong volume of transactions, but mainly involving lower-value items.

"The traffic is there and is good, but the numbers aren't extravagant," Meirov reported. "There seems to be a little hesitation on big-ticket items."

Weak prices and an oversupply in the under-1-carat range are creating a degree of difficulty, despite some positivity, according to Vincent Yiu, director of Hong Kong's Brilliant Trading Company. The recent Chinese New Year season failed to boost the market significantly, as the US-China trade war and economic volatility led to weak retail sales, and traditional jewelers lost business to e-commerce rivals, he noted.

"Not enough buyers are willing to invest for stock," Yiu explained.

The fair, one of two parallel events, opened Tuesday at the AsiaWorld-Expo venue, and runs until Saturday. The Hong Kong International Jewellery Show, taking place at the Hong Kong Convention and Exhibition Centre, began Thursday, and ends Monday.

"In the midst of the current economic instability, these jewelry trade shows help brace the industry for the challenges ahead," said Benjamin Chau, deputy executive director of the Hong Kong Trade Development Council, which organizes the fairs.