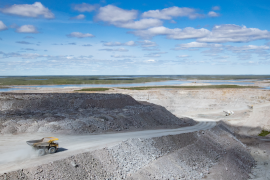 
For the full year, the miner sold 3.25 million carats at an average value of $US74 per carat, a modest increase from the $US70 per carat earned last year for revenues of $US185 million. The positive results were achieved despite a bit of a downturn in Q4 amid challenging market conditions, as the miner sold 822,548 carats at an average value of $US65 per carat for total proceeds of $US53.6 million. Production also slowed by 5% in Q4 despite an 8% increase in ore tonnes treated, as the recovered grade slipped 12% to 2.06 carats per tonne (cpt). For the year, Gahcho Kue delivered a grade of 2.17 cpt, climbing 1% from the 2.14 cpt recovered in 2017.


Commenting on the Q4 and full year diamond sales, the company comments, "Diamond sales were in line with our expectations and reflect current market conditions. Prices for the better quality larger goods, where the majority of our value lies, remained strong throughout the year." However, they add that "during the latter part of H2 2018, lower qualities and smaller sizes experienced price pressure, driven predominantly by a weakened Indian Rupee against the US Dollar. Demand at retail in both the US and China for luxury goods were reported to be strong overall in 2018, initial reports from the Chinese and US holiday retail season are generally positive."


Reid Mackie, the Company's Vice President of Diamond Marketing, commented: "we had a strong start to 2018 with price increases in most rough diamond categories. Low quality and smaller sized rough diamonds did experience price pressure during H2 2018, but our sales process attracted sufficient demand to achieve the selling of all our production for the year.  We expect to see more interest in the first quarter rough sales where the market is traditionally stronger."


Stuart Brown, the Company's President and Chief Executive Officer, commented: "From a production perspective 2018 was a good year for Mountain Province Diamonds where we achieved our expected tonnes mined and recovered a record amount of carats. Operationally, the mine has settled down and our expectation is that it will continue to perform at these levels in the future. So far in 2019, production has been positive."