Next Ter Haar: It's Time Diamonds Become Symbolic Of The Good That They Do
Newsletter 08.08.2019 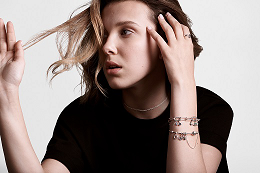 Pandora has named two-time Emmy-nominated actress Millie Bobby Brown as the face of a global campaign for its new jewelry collection, in an effort to reinvigorate interest in its brand and appeal to a younger audience.

Brown is best known for the Netflix series Stranger Things, the 2019 film Godzilla: King of Monsters, and her appointment as the youngest-ever Goodwill Ambassador for the United Nations International Children’s Emergency Fund (UNICEF). She has signed a two-year contract to promote the Danish jewelry retailer.

“Millie Bobby Brown is the perfect ambassador for the next generation of Pandora jewelry that empowers young women to express themselves,” Pandora’s chief creative and brand officer, Stephen Fairchild, said Wednesday. “Not only an accomplished actor and making her presence as a voice of her generation known, she also brings a youthful and individual approach to jewelry that perfectly complements Pandora’s vision and creativity.”

The campaign, which will be shot by acclaimed fashion photographer Cass Bird, will feature Brown wearing her own personally curated pieces of jewelry and charms from the new collection. Pandora will launch the images in October, followed by a digital film in which the actress talks about her personal connection to the new pieces.

“I love Pandora because everyone can tell their own story, and each symbol can represent your individuality,” Brown explains.

The move is the latest of the jeweler’s attempts to reengage with consumers following consistently disappointing sales, which led to the departure of the company’s chairman and CEO, as well as more than 1,200 job cuts.

Last week, Pandora announced it was planning an event in Los Angeles at the end of the month to introduce the changes it’s made to its branding, store design and collections. It also said it was planning design collaborations with global franchises, celebrities and influencers.