Previous DDI Unveils Standards for Artisanal Miners Next "Once in a lifetime” Jewelry Collection To Grace Christie’s Auction Block
Newsletter 04.05.2019 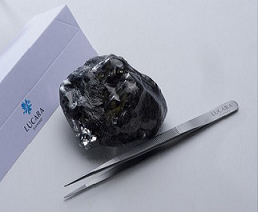 Lucara Diamond has recovered a 1,758 carat diamond from its wholly-owned Karowe diamond mine, in Botswana.

"Karowe has now produced two diamonds greater than 1,000 carats in just four years, affirming the coarse nature of the resource and the likelihood of recovering additional, large, high quality diamonds in the future, particularly as we mine deeper in the orebody…,” said company chief executive Eira Thomas.

The unbroken 1,758 carat stone was recovered through Lucara's XRT circuit and it had been characterised as near gem of variable quality, including domains of high-quality white gem.

Since commissioning of the XRT circuit in 2015, a total of 12 diamonds in excess of 300 carats had been recovered at Karowe, from a total production of about 1.4 million carats.
Of the 12 +300 carat diamonds recovered, 50% were categorised as gem quality with 11 sold to date generating revenue in excess of $158 million.

Source: Mathew Nyaungwa, Editor in Chief of the African Bureau, Rough&Polished
Back To List