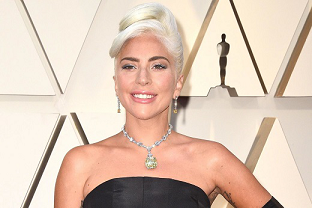 The Oscar winner wore the 141-year-old cushion-cut Tiffany Diamond-  which originated in the Kimberley mines in South Africa - was last seen on Audrey Hepburn at the publicity shoot for the 1961 movie Breakfast at Tiffany's. It's the first time the diamond has featured at an awards-show red carpet, Tiffany noted."Lady Gaga is the ultimate creator, innovator and rule-breaker, and I'm thrilled that she will be wearing the legendary Tiffany Diamond on the awards-show red carpet for the first time since it was discovered," Tiffany chief artistic officer Reed Krakoff said Sunday.The A Star is Born performer also wore fancy-vivid-yellow and white diamond earrings.