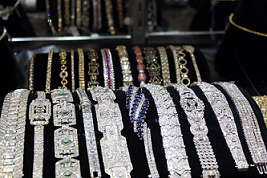 Jewelry is one of three categories in the luxury sector expected to see solid growth in 2019, as domestic consumption in China and the US increases, according to Bain & Company.

Leather goods and handbags will also see sustained growth throughout the year, while watches will begin to show recovery in specific regions, including Europe. However, Hong Kong, the largest consumer market for luxury timepieces, will remain slow.

Overall, the personal luxury-goods market will grow between 4% and 6% to EUR 271 billion ($303.48 billion) to EUR 276 billion ($309.08 billion), Bain estimated in its global luxury-goods report, published last week. Mainland China will be the main driver of growth in the luxury market, with sales expected to rise 18% to 20%. Chinese consumers will comprise more than 45% of the market, and half of their luxury spending will take place locally, Bain noted.

The increase in domestic spending by Chinese consumers will affect Hong Kong and Macau, which usually see increased sales in the luxury sector from Chinese tourists. Even so, sales in the rest of Asia will rise 10% to 12%, Bain predicts.

Purchasing in the US will rise 2% to 4%, rebounding from slow sales in 2018 due to economic uncertainty brought about by trade-war concerns, the report noted. Increased tourism from Mexico and Brazil will offset the loss of consumer spending by Chinese visitors.

“[There will be] a promising rise in domestic consumption of full-price stores despite a declining flow of Chinese tourists,” D’Arpizio explained.

Younger shoppers will play a major role in the rise of the luxury industry, Bain stressed, with Generations Y and Z contributing a significant portion of the future market growth. Chinese Gen Z shoppers are the “segment to watch” in that category, with a proud and empowered attitude, significant spending power, and a penchant for impulse purchases, according to Bain.

“We expect stable growth in 2019,” D’Arpizio added. “Overall we are seeing moderate growth in most markets.”