Next ALROSA’s Verkhne-Munskoye deposit is rich with large diamonds
Newsletter 30.03.2019 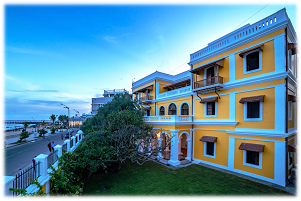 The restoration of Vasant Villa, a late 18th century residential house in Pondicherry owned by Jee Parivar (‘Jee’- Name derived by the family from their late grandmother. ‘Parivar’ – means family in Hindi) has been recently chosen to receive the 2nd prize in the Conservation of Heritage category in the HUDCO Design Awards 2018. Jee Parivar is established by Late Kokilaben & Vasantlal L. Mehta, founder of Blue Star Diamonds and Arjav Diamonds.

The Design awards are presented annually to various types of urban construction projects in India across different categories. The restoration project was presented for the Conservation of Heritage award along with INTACH Pondicherry.

Vasant Villa, formerly known as Villa Orphelia, was built in the late-18th century in what was then called the Boulevard Town of Pondicherry, defined by the four boulevards at the outer ends in each direction. The town had a Tamil and a French quarter, separated by a canal and a rectilinear grid, each with distinct types of architecture, though there were cross cultural influences also.

Built on a long plot with entrances on two adjoining roads to the east and west, the villa had a symmetrical plan and facade which opened to the garden. Colonnaded porticos provided protection from the sun and rain and gave a pleasant transition to the garden. The interiors were more ornate, with a long central hall and rooms on either side. Individual rooms were marked by high ceilings, high arched doors and windows with masonry bands having louvered or panelled wooden shutters. Heavy wooden beams and joists on the ceiling supported a Madras terrace roof.


The entrance to the plot featured a large pillared gate and the compound wall had curved panels divided by intermediate pilasters. The porticos had granite steps and loop holed masonry railing above.

After it was acquired by Jee Parivar in 2011, remodelling was proposed requiring construction of additional floors to accommodate an entire joint family with a small pantry on each floor; to add a swimming pool and garden area; to move the main entrance face the quieter Dumas street instead of Goubert avenue, and to ensure that its heritage value was preserved.


After appropriate geotechnical tests, the foundation of the structure was cement grouted to enhance its load bearing capacity. Further, Autoclaved Aerated Concrete blocks were used instead of normal bricks for construction and lime mortar was used throughout, except in the case of the foundation. Ferrous items were totally avoided as the villa is just 60m from the coastline. Due to the non-availability of hydraulic lime in the area, lime was sourced from local kilns using marble quarry waste as raw material, and the mortar made by grinding lime and sand in a wet grinding mill. Burma teak timber was used throughout, while flat terracotta tiles were used with a concrete layer for waterproofing of the terrace. Some elements such as the pot balusters were made by potters and some of the features of the external facade were shaped in lime stucco.

Today, the remodelled Vasant Villa has retained the predominant character, style and architectural features of the precinct and blends into the surrounding area which has a high concentration of buildings with significant heritage value. Precisely, Vasant Villa is remade with the same materials and building style, as it was 220 years ago.


Ashit’s Blog:
This home Vasant Villa is a tribute to our parents the founder of Blue Star and the seed company of A-Star Alliance started in 1966. Due to our old ties with Sri Aurobindo Ashram from the days of our childhood all 3 brothers Akshay and Anuj and myself used to spend maximum of our time and holidays in this unique city on the southern end of India near the Bay of Bengal. Our mother’s strong devotion towards the Ashram made each and every member of Jee Parivaar, a natural follower of the Ashram and regularly visiting and praying and seeking support from the Divine Mother. She has helped our company grow and has always influenced any decisions taken by the group to achieve all our dreams and vision. To her we offer all our hard work of all the 3 generations and many more to come in future This is our temple and our God whom we offer today!!!