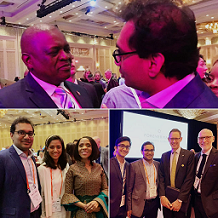 This was my 15th year at the JCK Jewellery Show in Las Vegas, where I represented A-Star Alliance (Blue Star Diamonds, Arjav Diamonds and Aurostar). The JCK show is the largest gems and jewellery convention held over the last 3 decades in the biggest jewellery consumer market in the world. Contrary to previous years, where there was a constant hustle bustle in all booths, a large representation of companies across the industry, this year the number of exhibitors and attendees were fewer than I can remember.

While I believe the diamond industry has significant potential and we are at an inflexion point, there are many factors that are causing disarray, confusion and disruption.

Until De Beers acknowledged lab-grown diamonds by launching Lightbox’ (a lab-grown diamond jewellery brand), exactly a year ago, traditional diamantaires never perceived this as a real threat. The very fact that De Beers has diversified into this space, legitimised the lab-grown business, causing uncertainty for the traditional natural diamond industry and affecting business drastically.

As a traditional diamond manufacturer and wholesaler in natural diamonds, I have seen prices plummet, demand drop and greater confusion among my customers. Keeping conversations as open as possible with our customers, they have shared that this confusion has also trickled down to the consumer as well.

As a result, natural diamonds companies are questioning their future and exploring diversification in the lab-grown sector, which still remains very nascent with mixed marketing narratives.

Never before has the world been so anti-global. The Brexit vote in June 2016 fuelled pro-nationalist sentiment around the world. Later the same year, America elected a nationalist leader, Donald Trump whose goal was to bring back manufacturing jobs back to the USA. Narendra Modi’s "Make in India” campaign initiated two years before further fuelled anti-global sentiment.

The Trade Tarif Wars between USA and China, the two largest economies in the world have spurred economic slow down around the world.

For the first time in history, the CEO of Forevermark, Charles Stanley announced that the bridal category has declined in the past year. This means that the value of the engagement ring business is declining. Millennials are getting married later, (or perhaps not getting married at all) and celebrating milestones very differently than previous generations. Some celebrate buying a house, others celebrate a child, milestones not connected to marriage, which is the traditional framework we have been used to. Unfortunately, marketing campaigns have not evolved to capture this audience.

Research has shown that millennials prefer to spend their money on experiences rather than material assets. I have seen no innovation among diamonds companies to address this. Designs that were successful 15 years ago are still kept at the forefront of most booths. The fundamental problem that our industry fails to address is not putting our customer at the center of the discussion.

Signet, the largest diamonds jewellery retailer in the world has been suffering over the past five years and their sales have declined year on year. Valued at $8 billion in 2015, it is valued at under $1 billion today. Distribution channels are changing and consumers what a different value proposition from diamonds.

Since the 19th Century, De Beers has been the leader in the diamonds industry. In the last decade, their leadership has diminished as governments of diamonds producing countries, and other miners have emerged with their own agendas. This has lead to a lack of cohesive and strategic direction among the diamond community.

It was a pleasure to listen to President Masisi to speak about the role of natural diamonds in the development of Botswana – 35 % of the country’s GDP comes from natural diamonds mining. His pledge and support to De Beers, the longest and most successful public-private partnership was encouraging.

However, President Masisi’s support to De Beers ‘Lightbox’ project was simply touched upon. It felt like the Botswana government was also underplaying the threat of the lab-grown industry on natural diamond mining. There is a void of leadership and vision in the industry creating a non-aligned innovation and consumer program.

As a consequence of the lack of leadership, other stakeholders in the business like financial institutions are warier than ever about the future of our trade. They are pulling back on funding, leading to a liquidity crisis amplifying the problems further.

Despite the above factors, the diamonds industry will continue to thrive in a way that we have never known before. It is time for us to step out of the box and do things we have never been done before. Lab-grown diamonds are here to stay and should be looked upon as an opportunity rather than a threat. DeBeers surveyed 70,000 people from all different socioeconomic backgrounds and found that consumers looked at lab-grown diamonds as fashion jewellery! Amazon in the U.S. alone sold $4.8 billion worth of jewellery last year. They have bullish figures for 2019 – they expect a double-digit percentage increase. As millennials prefer experiences now, how can we integrate that in diamonds? What are you going to do differently?