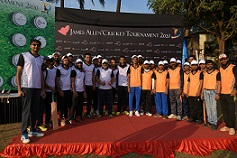 The James Allen Cricket Tournament 2020 – Season 3 witnessed 19 Teams playing a total of 19 matches with 145 overs bowled, 1533 runs scored and 131 wickets taken over 14 hours of intensive cricketing action in one day.

The Diamond companies in Mumbai, India, witnessed athletic quality performances, the spirit of sportsmanship and fair play in the tournament brilliantly organized and administered by the Segoma Team of James Allen. The organizing team with their continuous determination and hard work made the event successful and thrilling. The tournament was played live on YouTube was witnessed by 13K+ viewers.

James Allen had also received an overwhelming response in online voting for the ‘Your Favourite Team’ with a total of 20000 votes. These were polled from India, US, Israel, Belgium, and Hong Kong in just 3 days, 22-25 January 2020. The winner for the vote ‘Your Favourite Team’ in James Allen Cricket Tournament Season 3 was Hari Krishna Exports Pvt. Ltd. with a total of 4479 votes.

The Cricket tournament was overall an exhilarating and entertaining event where we witnessed an amazing battle between the teams. It surely brought encouragement and a feeling of co-operation amongst the Indian Diamond community.