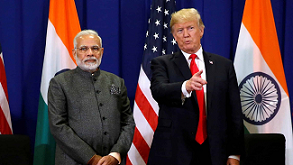 The withdrawal of India’s beneficiary status under the Generalized System of Preferences (GSP) trade program is expected to have a "moderate" impact on India's exports of gems and jewelry to the US, but will not directly impact diamond exports - contrary to what some have been reporting. Indian ratings and research agency CRISIL wrote on June 17 that "the withdrawal will have limited impact on India’s exports," adding that it will "moderately affect exporters of gems and jewelry, as ~15% of India’s exports to the US benefitted from GSP in calendar 2018." Polished diamonds were not among them.

Moderate or not, the impact of the change in India's status is another unwelcome blow to the country's slumping gem and jewelry sectors, which will be among the hardest hit of the export sectors by the withdrawal. "Withdrawal of the GSP will lead to additional duties worth approximately 7% for exports of jewelry of precious metals and imitation jewelry" the report states. "That will reduce competitiveness of domestic exporters and put pressure on margins." Some 45 items used to make jewelry have been withdrawn from the GSP benefits, including: precious stones (other than diamonds) and semiprecious stones, silver unwrought (other than bullion and dore), gold (including gold plated with platinum) in semi-manufactured forms (except gold leaves) among others. (for a complete list of all GSP-eligible items for all beneficiary countries, click here). This is, of course, a concern to India's jewelry exporters, as gems and jewelry account for 19% of India's merchandise exports to the US.

As CRISIL points out, the situation is exacerbated by the fact that Indian exporters of gems and jewelry faced headwinds in fiscal 2019 in the form of stringent lending rules, working-capital crunch, and a significant drop in bars and coins as well as silver jewelry exports. The government also doubled the import duty on cut and polished diamonds from 2.5% to 5.0% in the 2018-19 budget, and increased it further to 7.5% in September 2018. However, if key export destinations reciprocate by imposing import duties on diamonds, exports from India may suffer. To mitigate the impact of the GSP withdrawal, the GJEPC has asked the government to grant 4 per cent benefit under the "Merchandise Exports from India Scheme" (MEIS) to key gem and jewelry export commodities to the US.

Some Indian commentators have been downplaying the overall impact of the GSP withdrawal. "The GSP withdrawal will not have a significant impact on India's exports to the US," said Commerce Secretary Anup Wadhawan. "The benefits in the absolute sense and a percentage of trade involved are very minimal and moderate." Indeed, India's exports to the US stood at $50.57 billion in 2017 with a GSP tariff advantage of only $190 million, which was less than 0.4% of the country's exports, which points to a marginal impact. India's reliance on the system has been reducing substantially over the years.

Meanwhile, Priyanka Pandit, writing for The Diplomat, takes a different approach, seeing the GSP withdrawal as more of a diplomatic than an economic issue, which moreover may provide opportunities and potential benefits if the government reacts appropriately. The Trump administration’s revocation of India’s status under the GSP program - ending over four decades of duty-free access to the US markets for Indian goods - is just one of Trump's recent moves to restore reciprocity and end unfair trading practices as he sees it. Pandit writes, "The inability to forestall the end of the preferential trade status calls into question New Delhi’s strong bilateral ties with Washington and calls for re-assessing India’s diplomatic options vis-a-vis the United States, before the current trade-related discontent grows into a bilateral trade dispute in the coming years."

"The end of GSP status in the short run requires Indian commerce department to manage custom duties on the foreign imports and easing regulatory standards for foreign companies, enabling them to do business in India. Owing to New Delhi’s raising of import duties since 2017, various WTO members have lodged complaints ... On the export side, the conflict lies vis-a-vis India’s trade-distorting export subsidies, which requires putting in place a recalibrated approach that would enhance the competitiveness of Indian exports and push them higher in global value chain." Pandit adds, "In the long run, however, the U.S. withdrawal of duty free benefits to Indian goods provides useful opportunity to improving India’s foreign trade and investment policies. More importantly, it serves as timely reminder to the Indian policymakers that dependence on the trade preferential schemes is a double-edged sword, where the short-term benefits are incompatible with the long term industrialization and developmental goals of the beneficiary countries."