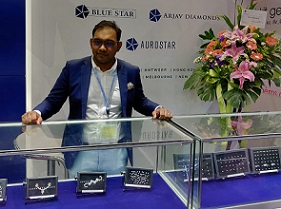 This was my 7th year at the Hong Kong Jewellery & Gem Fair - June 2019, where I represented A-Star Alliance (Blue Star Diamonds, Arjav Diamonds and Aurostar). The Hong Kong Show (June Fair) is reputed as one of Asia’s top three fine jewellery events which also focuses on Gems and Watch sector. This year June Fair celebrated its 31st anniversary.

Unlike previous years, this year’s show faced many challenges like the ongoing Trade Tariff War between USA and China, the overall slowdown in the Chinese economy and the current mass protests for withdrawal of China extradition bill which drew over one million people to the streets of Hong Kong. Those who planned to visit the show on the weekend did not show up due to the intense political scenario.

The slowdown has affected consumer’s ability to purchase and overall sentiment in the China market. Also, due to the looming trend of CVD, polished prices are affected. There was an expectation that most retailers had not purchased their stock and market may show a little trigger once they decide to make a purchase. However, that was not the case. Buyers are showing extreme caution in stocking their inventories and no one wants to buy more than they can sell. This grossly affected the big volume sales. That being observed, by the end of this year, there are chances of the market picking up in the Jewellery sector which will overall also show a positive trend in polished diamonds too. This thought is seconded by the recent market observation made by Bain and Company where they state that sales of the luxury-goods market are expected to rise 18% to 20%, Mainland China being the main driver of growth in the luxury market.

Observing the current market trend, there was a correction in pricing the expensive category stones like 3 carats up, D-FL and D-IF. A minimum 10-15% correction in prices had to be made to meet the market scenario. Thankfully, there was a demand seen for commercial ranging products. Exhibitors at the show looked for quality buyers even if the footfall was very less. We observed that the HK & Chinese demand for diamonds has been lower by 50% than last year. Retailers informed us that Gold sales are seeing an upward trend but the same cannot be said for Diamond jewellery, which is currently seeing a downfall.

Lack of promotion of diamonds, lack of transparency in business due to CVD and the unrest in China because of the Trade Wars are the key reasons for this year’s show to end on a low note. However, there is a hopeful expectation that the market will soon pick up and become stable before the end of 2019.
Image: Anshul Mehta (Director of Aurostar (HK) Ltd. at the Aurostar Diamonds Booth in the recent Hong Kong June 2019 Show.
Anshul's Blog, Anshul Mehta, CVD, Trade wars, HK Show, June Show, HKTDC show, Aurostar Diamonds, Aurostar HK, A-Star Alliance
Back To List