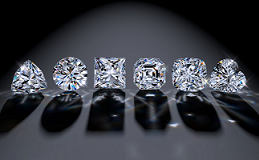 During standard testing by GSI, a 2-carat CVD diamond was exposed to high-powered UV rays and went from near colorless to blue color. It was then returned to the vault. When it was taken out a week-and-a-half later, it had retained the blue color.

While CVD diamonds can undergo color changes under UV light or extreme light, they typically return to their normal color after 30-60 minutes of direct sunlight. This stone, however, took two-and-a-half hours to regain its normal color. Based on this finding, GSI recommends that while most diamonds will not change to this extent, all lab-grown CVD diamonds should be placed in a full-spectrum light box for at least 30 minutes before color grading.

According to GSI Chief Information Officer Nicolas Del Re, color changes may happen through casual use as well."When wearing out in the open, CVD diamonds may change in coloration upon even subtle exposures to electromagnetic radiation such as UV rays on a sunny beach or under a blacklight in a nightclub for example."

The changes occur because of photochronism. This is when electrons in defects within a CVD diamond cause the energy state to change and affect the way color is absorbed on the visible spectrum, explained Del Re.