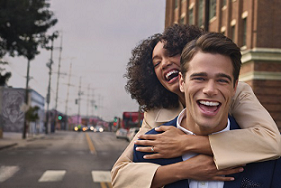 Cue the sentimental music and emotive narration, Forevermark has launched a marketing campaign for its first bridal collection.

The campaign, titled “I Take You, Until Forever,” aims to depict the ups and downs of marriage, including the jokes, arguments, surprises and the small moments that go unnoticed, explained director Geej Ower.

The two-minute film, which went live on various media outlets this week, centers on couples at various stages of their relationship — from the bearded millennial proposing on the beach, to another engaged in an argument with his wife, same-sex partners who’ve adopted a dog and the older couple who’ve been together since 1968 watching a ball game together.

“Forever is no longer the fairy-tale ending and is instead created through the commitments that a couple makes to one another daily,” Charles Stanley, Forevermark’s US president, said.

De Beers last ran a bridal campaign about 20 years ago and is returning to the category amid reports that sales have been declining. Bridal accounts for about 26% of diamond-jewelry sales in the US, but the category is softening, Stanley noted when unveiling the campaign to the brand’s retail partners at the recent JCK Las Vegas show.

That may be because millennials have a different attitude to marriage than previous generations, with a formal commitment often coming after other milestones, such as having children, he explained. When deciding to get married, couples take into account a different set of considerations than in the past, and they’re spending less on the ring to balance other expenses, Stanley added.

Forevermark’s Engagement & Commitment Collection includes 17 engagement-ring styles, with center diamonds ranging from 0.30 to 1 carat in round, oval and cushion shapes, along with 11 wedding bands. The new marketing campaign will run through the holiday season, and all assets will be available to participating Forevermark jewelers, the company said Wednesday.

Source: Rapaport
Image: A still from the video advertisement.(Forevermark)