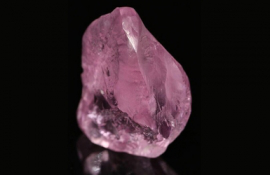 The recovery and sale of a 13.33 carat pink diamond for a Letšeng record of $656,933 per carat, and the recovery of another two diamonds greater than 100 carats during the period boosted their returns from the quarter and increased Gem's average price per carat by 51% over last quarter to $1,900. Gem recovered 29,458 carats during the period, which was in line with their guidance targets and equal to Q4 2018 (29,523 carats).

The company notes that its business transformation focus, cost savings and innovation initiatives are still on course. "The diamond detection pilot plant project remains on target to be commissioned at the end of Q2 2019. Construction and set-up have commenced on site." The diamond detection strategy implements new technology designed for the early detection of large diamonds, enabling them to be removed from the crushers at an early stage, thereby reducing diamond damage. The Group says it remains on track to achieve its cumulative target of $100 million in incremental revenue, productivity improvements and cost savings for the 4-year period to end 2021. At the end of Q1, the Group had $40.7 million of cash on hand of which $34.0 million is attributable to Gem Diamonds. The Group’s net cash position was $11.0 million (of which $7.9 million was attributable to Gem Diamonds). Undrawn and available facilities at the end of Q1 amounted to $59.5 million.