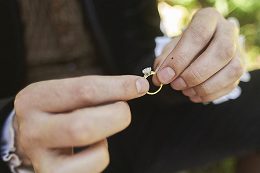 The Diamond Producers Association (DPA) has unveiled a multimedia campaign tracing the entire story of a diamond from volcanic eruption to its purchase as jewelry.

The new cinematic ads, titled “The Diamond Journey” and ranging from 15 seconds to three minutes, are part of the organization’s “Real Is Rare, Real Is a Diamond” series. The pieces highlight the connection between diamonds and life’s most intimate moments, the DPA explained. (See the three-minute video at the end of this story.)

“‘The Diamond Journey’ tells the timeless and epic story of natural diamonds in a new and modern way,” DPA CEO Jean-Marc Lieberherr said Monday. “We know from research that the majority of consumers are unaware that diamonds are the oldest thing they will ever touch or own — it’s a powerful message that resonates.” To reflect this, the DPA will use the taglines “Three Billion Years in the Making” and “Before There Was Life, There Were Diamonds.”

The full three-minute video shows a volcanic eruption that creates a diamond; the first stone being discovered in a cave; the first diamond-engagement proposal, between Archduke Maximilian of Austria and Mary of Burgundy; modern-day couples; and, eventually, a woman on a spaceship.

The campaign targets consumers aged 21 to 39. It will launch digitally on October 15 in partnership with publisher Conde Nast, The New York Times, and Sports Illustrated. It will feature as television placements on the Hallmark Channel and on ESPN during NFL games, as well as with screenings in movie theaters and on social media. It will also appear in transit hubs, including New York’s Grand Central Station and JFK airport, and LAX airport in Los Angeles.