Previous ALROSA 2018 Sales Up 6% On Year To $4.5 Billion Next Vicenzaoro Show dedicated to the "Sustainable Creativity"
Newsletter 25.01.2019 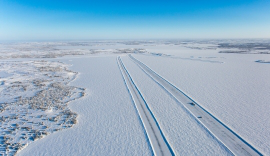 Multiple forces seem to be conspiring against the diamond industry these days, and if mining stocks are any indication, the wider market takes a pessimistic view of its prospects. But as independent analyst Paul Zimnisky explains in his latest analysis, "Don't Give Up on the Diamond Industry Just Yet", to take this attitude as a foregone conclusion is to underestimate the resilience of the industry as a whole and overlook not only the enduring intangible value of diamonds, but also the impact of what may well become their much more tangible rarity. Republished in full from Paul Zimnisky's Diamond Analytics with the analyst's generous permission, we present his in-depth look at the present and future of the diamond industry.

Don't Give Up on the Diamond Industry Just Yet

If diamond miner equities are a proxy, the sentiment surrounding the diamond industry is currently at historic low levels [See Figure 1]. Just in the last two years, a basket of diamond producer stocks was down 28.9% in 2018, following a decline of 17.3% in 2017 (see Figure 1). This is in part due to idiosyncratic operational challenges that most all of the miners are dealing with in one way or another, however, investor sentiment is also undeniably low by valuation standards projected by future diamond price expectations. This has led to concerns spanning the industry's future growth prospects and overall longer-term economic viability.

The ultra-successful "A Diamond is Forever" marketing campaign has been discontinued for over a decade now and so have many of the positive attributes of diamond ownership in consumer's minds. The glamorous cultural perception of diamonds has faded and has somewhat been replaced by an association with civil rights abuses and De Beers monopolistic pricing practices. Just look at the reader comments under any diamond related post on Reddit or any other pop culture media platform.

Further, marriage rates are declining in the U.S., Japan and China, just to name a few, a trend of inconspicuous consumption seems to be on the rise and the emerging wide-availability of lab-created diamonds are providing consumers with a lower-priced alternative to natural diamonds.
All of that said, global diamond jewelry sales in nominal and real terms have been growing at a steady rate for the past 9 years. This is in part due to the continued financial liberation of middle-class consumers in developing economies, continued positive global GDP growth post-Global Financial Crisis and continued population growth, especially in the diamond industry's most important end-consumer markets, the U.S., China and India.

In addition, despite the fact that marriage rates are declining, diamond consumption by self-purchasing women in on the rise and younger generations in the U.S. are still buying diamonds despite a narrative that the generation is too indebted to afford luxury. In fact, per-capita jewelry demand growth in the U.S., the diamond industry's largest end-consumer market at approximately 50%, has been non-negative since 2010, which normalizes for population growth --technically, without rounding, there was negative growth in 2016 of 0.19% [see Figure 2].

Impact of Marketing and Branding

Despite lab-created diamonds dominating the narrative surrounding the natural diamond industry's survival, the life-blood (perhaps a poor word choice) of natural diamonds, as with most all of luxury, has always been successful marketing and branding. For example, there was not even a Japanese word for diamond until De Beers began marketing in the country following World War II. While Japan's share of global diamond demand has since fallen off in recent years, it represented as much as 20% of global demand as recently as the early 2000's and has remained an important market for the industry.

It is imperative that the wearing lingering impact of “A Diamond is Forever” has been in part handed a life-line by the Diamond Producers Association, which has reinitiated generic diamond marketing on behalf of the industry. However, the DPA's annual budget at around $80 million is approximately only a third of what De Beers was spending on “A Diamond is Forever” in inflation adjusted terms.

The good news is the future existence of a robust natural diamond industry lies within the industry itself and its ability to continue to convey the intangible value that natural diamonds can bring to consumers. If buying a piece of diamond jewelry was purely a fundamental purchase based on rationality, the impact of lab-created diamonds for instance, would be much more dire --and it is in the case of synthetic diamond used in industrial application, as the lower price option handedly wins if the performance is comparable.

However, diamond jewelry is different from industrial-diamond because it is a purchase based on how it makes someone feel. There is significant emotional appeal if diamond jewelry is conveyed properly, and the story behind a natural diamond specifically can be very compelling in that context. Further, narrowing in on the concept of a diamond's marginal utility(1) and principles that are hard-wired into humans such as Zahavian signaling(2), can also continue to be leveraged by the diamond industry to drive demand as it has in decades prior. The future viability of a vibrant diamond industry unequivocally hangs on the industry's ability to reignite a natural diamond's appeal and “purpose” in society.

Importantly, more expensive natural diamonds have historically maintained at least some resale value after purchase, which is tied to the inherent rarity of higher-quality natural diamonds. This “store of value” component is unique to a natural diamond, relative to a lab-created gem, and certainly leads to a natural diamond's appeal, especially in a culture like India, one of the diamond industry's fastest growing end-consumer markets. While this is just an anecdote, a young Indian professional recently shared her thoughts on purchasing a natural diamond: “For Indians it's never been just the romance of the origin behind diamonds that drew us to them…as a group, we always look for value, what resale value (this jewelry) will have, (and this is what) will ultimately be the clincher.”

Without the rarity component, outside of industrial application, diamonds would arguably just be another bauble. Further, anyone that makes a blanket statement that natural diamonds “are not rare” is leaving out context. Just look at the above chart of diamond miner stocks. If diamonds were easy to find and produce, and if diamonds were “overpriced,” the companies that produce them would be doing much better financially (see Figure 1 again).

If gold could be synthesized, everyone knows what would happen to its value outside of industrial demand. And, interestingly enough, technically gold can be synthesized with a particle collider and a lot of energy. It is extremely expensive and nowhere near close to economic, but it is possible to synthetically produce gold. Further, in the process an element, Au, is produced, which is not identifiable from the naturally occurring version, diamond on the other hand is a mineral, and synthetic diamond can be differentiated from natural with certainty.

The relative rarity of natural diamond can quite clearly be seen in future supply projections. If the industry is in fact successful in maintaining or growing demand for natural diamonds in the longer term, the question of insufficient future supply is legitimate. There is only one new large-scale mine in development globally and only one pre-development project that is likely to reach production-stage within the next ten years, while close to 20 existing diamond mines will reach exhaustion within the next decade.

Looking even further out, at current diamond prices, the global portfolio of diamond mines will shrink from over 50 commercial mines today to an estimated 14 by 2040, consequently production in carat volume will fall from 145 million carats to roughly 60 million carats (see Figure 3). In order to maintain what is currently a $90 billion natural diamond jewelry industry, diamond prices would have to more than double and/or jewelry margins at the end-consumer level would have to increase, in part by decreasing diamond content, in order to maintain even a nominal zero growth environment in dollars.

However, with sufficient demand, long-term supply projections would most likely improve. There are undoubtedly undiscovered diamond deposits, but there are also known deposits that are simply not economic at current diamond prices. Higher prices would theoretically improve economics of undeveloped assets and also lead to improved profitability for existing miners, and thus shareholders, which would then be more likely to provide funding for new exploration and development.

The diamond industry has a long, fascinating and impeccably resilient history, marked with case studies prevalent in text books. The industry has overcome anti-trust legislation, threats from CZ, Moissanite and other simulants, the blockbuster film Blood Diamond and generations of changing consumer preferences and cultures. Given its track record and a current environment that may not be as dire as some would make you believe, it would be prudent to think twice before giving up on the industry.

1 Economist Adam Smith is generally credited with first considering the concept of “marginal utility” or more specifically the "paradox of value" in the 18th century, however, the concept has been traced back as far as the 15th century. A common example is the "diamond-water paradox." It is based on the apparent contradiction that while water is more useful, diamonds command a higher market price because it is not necessarily the total usefulness of the item that determines the price, but the usefulness of each unit of the item, and units of water available far exceed that of natural diamonds which are non-renewable. Therefore, the usefulness of one additional unit of diamond is greater than an additional unit of water, which is in abundant supply. Thus, diamonds are worth more to people than water on a per unit basis.

2 "Zahavian signaling" is based on the concept that evolution has led to the requirement for honest signaling between humans due to the obvious desire to deceive each other. In the case of diamonds, a proposal that involves a relatively expensive engagement ring (for the individual giving it) signals to their fiancée that the proposal is a true, sincere commitment. For instance, it may take a $6,000 natural diamond to provide a sufficient signal, but an $800 lab-created diamond may prove insufficient.