Previous Aurostar Shines! Next Synthetics Vs. Natural: The Battle Over Value
Newsletter 16.11.2019 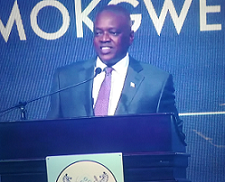 There is need for Botswana to intensify its efforts to broaden the country’s economic base around diamond mining and beyond to fully exploit rich human capital already developed and that which is to be developed, according to President Keabetswe Masisi. “I am well aware of the saying that a diamond [lasts] forever, which is true in all respects, related to sales and marketing of these precious stones, but am also alive to the fact that diamond mining will not last forever,” he told a diamond conference in Gaborone on Tuesday. “… we should work towards having a private sector led and export focused economy that will enable us to create sustainable jobs. This will indeed go a long way in ensuring that we create a sustainable vibrant, and diversified mineral sector that will be integrated into the other sectors of the economy as espoused in our long term national vision 2036.”

Diamonds had been the largest private sector employer in Botswana and the major driver of growth and development, contributing more than 60% of the value of exports and 30% of GDP.

Masisi previously said his government would increase access to technical education and set up initiatives in tourism, mining, beef as well as financial services. The Botswana leader also told the conference that full beneficiation within the diamond industry remains a key objective of the southern African country’s diversification drive.  “It is indisputable that diamonds are a key contributor to Botswana’s economy. This means that a single industry…plays a remarkably important role for us as a nation,” he said. “Diamonds are even more important to our international trade, representing more than 60% of our export value. In this respect, government developed beneficiation strategy to enable citizen participation in the diamond value chain.”

Masisi said among other things, this strategy will equip citizens with appropriate industry skills, general management and leadership skills. “We need to move further up the pipeline to jewellery manufacturing and retail,” he said. “Participation of these upmarket levels of the pipeline are, however small, and will go a long way in promoting Gaborone as a diamond city and Botswana as a number one diamond destination.” Botswana had been leading its peers in Africa on beneficiation.
It established what it called the Diamond Hub in Gaborone to promote diamond beneficiation.
This move was also boosted when the country signed a deal with De Beers that saw it receiving 10% of Debswana’s production in 2011, rising to 15% from 2016.   However, diamond cutting and polishing companies in the country had been grappling with high operational costs.

The country was said to have 20 cutting-and-polishing factories in 2015 and were at the time processing $1-billion worth of diamonds a year. Meanwhile, the Botswana leader said the diamond industry should take cognisant of the ever changing and shifting consumer landscape across the world given the modern age of information and communication technology. “Social media plays an influential role in influencing purchasing decisions of consumers and therefore our industry practices and cultures must take this into consideration in responding to the new reality, furthermore, consumers are increasingly aware of international social issues and are demanding more responsible business practices…,” he said. “… consumer behaviour is of paramount importance to my government and to De Beers which calls for careful utilisation of existing technologies and creation of new ones to respond to the emerging diamond consumption patterns.”

He also noted that diamond mining companies should strive to ensure that the communities where they are mining diamonds are part of the process in the value diamond chain. “In this regard, we have an obligation to motivate favourable development policy and robust business practices, which accommodate the interests of these communities in the whole scheme of diamond mining and production,” said Masisi.