CAR Invites De Beers, Alrosa to Mine Its Diamonds 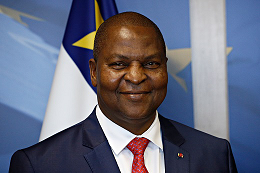 The Central African Republic (CAR) is trying to entice large diamond-mining companies to set up operations in the country, as part of its effort to reform the sector and meet Kimberley Process (KP) regulations.

The government has already contacted both De Beers and Alrosa, President Faustin-Archange Touadera said in a speech to the Antwerp trade Monday. Allowing established companies that already meet Organisation for Economic Co-operation and Development (OECD) guidelines to mine in the country will enable the government to monitor the sector to prevent smuggling, Peter Meeus, an adviser on the diamond industry to the CAR government, told Rapaport News Tuesday.

Under the reformed rules, miners would have to export a minimum of about $3 million worth of diamonds per quarter. CAR will also overhaul its tax legislation to bring the diamond industry more in line with neighboring countries, granting operators a rate of 4% on exports, as opposed to its current 12%, as long as they meet the minimum export figure. In comparison, the Democratic Republic of Congo offers a tax rate of 5.75%, according to Meeus.

Currently, the KP allows CAR to export diamonds from restricted areas that are in compliance with its regulations. Those “green zones” represent a small portion of the country. In February, the government signed a peace agreement with rebel forces that it hopes will eliminate violence, Touadera added, although the agreement has yet to be extended to diamond reform, Meeus noted.

”I can confirm we’re focused on our current portfolio, and have no plans to undertake any activities in the Central African Republic,” David Johnson, head of strategic communications for De Beers, confirmed to Rapaport News Tuesday.