Can Nanotechnology Save The Diamond Trade? 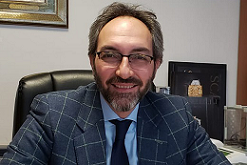 It’s not easy for a diamantaire to compete in the emerging diamond-traceability market, admits Bruno Scarselli, a New York-based supplier of fancy-color diamonds. As the likes of De Beers, the Gemological Institute of America (GIA) and others roll out their tracking programs, he urges the trade as a whole to look beyond blockchain and consider its biggest obstacles.

“We need to restore trust in our product and inject liquidity back into the market,” stresses Scarselli in his pitch about technology that he believes will help the industry meet those challenges.

For the past two years, his company, Scarselli Diamonds, has been developing a product it provisionally refers to as Diamtek, which uses nanotechnology to laser-inscribe an identifying number inside a diamond. The marker is located under the table, rather than on the girdle where other inscriptions such as a grading-report number are typically engraved.

The technology lodges the number on a very secure location in the diamond, with minimal loss of weight and without compromising the clarity of the stone, Scarselli explains in an interview with Rapaport News.

The advantage of having it inside the diamond, he continues, is that the tagging becomes permanent and cannot be tampered with.

That enables several applications that Scarselli is marketing to users and potential investors.

The first is that it enhances the possibility to extract and track information about the diamond, be it the grading specifications or the provenance of the stone, all of which would be uploaded to a blockchain.

Scarselli also emphasizes that retailers can use the technology to “bring the techy millennial to the table.” For example, one could use a smartphone to scan over the ID tagging and gain access to the diamond’s information, thus enabling jewelers to tell a better story, Scarselli explains.

The third application, which in Scarselli’s view presents its greatest potential, is the development of a financial tool to help boost liquidity in the diamond market. Given the decline in confidence in the industry among banks, Scarselli’s primary goal with the technology is to entice other sources of capital by creating a financial tool that can be bundled with the traceability program.

The permanence of the laser tagging creates a proof of ownership that the diamond industry has traditionally lacked, and that can be applied to provide financial assurance, according to Scarselli.

“Diamonds don’t have title today – something [beyond the invoice] that says you own the diamond,” he notes. “The mentality is that if you have a diamond and a certificate that goes with it, you’re assumed to be the owner. By emphasizing possession over ownership, we stand to lose a lot of money.”

Diamtek is building a platform whereby a diamond buyer also gets a digital token associated with the stone, and that token is registered on the platform. That brings an “absolute right of ownership” of the diamond, even if it isn’t in one’s immediate possession, he stresses.

Scarselli believes tokenizing the purchase will restore trust in diamonds as an asset, and therefore make them more marketable to financial institutions and potential lenders.

Supporting those goals, Scarselli has patents pending in the US for the tagging and smartphone-reading technology it uses to inscribe and read the ID marker, and a second patent filed for the token.

The patents were reportedly made “discoverable” for reading and comment last week by the US Patent and Trademark Office, a development Scarselli hopes will boost interest in the technology. His prime target is to entice Wall Street backers to inject capital into the industry via the token.

In addition, grading labs could adopt the tagging technology for their reports, while retailers might want to tap into the traceability application to provide further assurances for their product.

Ideally, Scarselli would like to license the patent and partner with a lab to do research and development on the equipment.

He acknowledges it’s a massive and ambitious undertaking for a midstream diamond company, especially given corporations such as De Beers, Alrosa, the GIA and Everledger are working on blockchain solutions of their own. But he’s confident the unique tagging capability, and its focus on potential lenders to the industry, differentiates Diamtek from those initiatives and provides a more far-reaching opportunity for the trade.

“Our project is not just a product for traceability. It’s much bigger and broader than that. And we are not just creating a laser tagging of the diamond,” he stresses. “We’re hoping to create a [program that will bring] normality, trust, credibility, and financing to our dying business.”