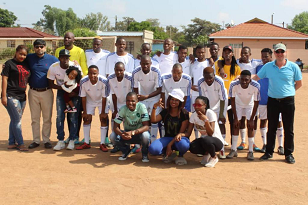 The Botswana Diamond Manufacturers Association (BDMA) Football tournament kick started on the 6th April 2019, an event sponsored by BDMA. The tournament comprises of eleven teams which are members of BDMA, a non-profit organization which was established in 2007 with a mandate of representing Diamond Manufactures throughout all facets of Botswana society and Government, through advocacy to advance the interests of the industry by giving one voice to the members of the Association. Mr. Bart Heylen, the Aurostar Factory Manager, serves as a Board Member of BDMA. Aurostar Diamonds Botswana is part of the A-Star Alliance.

On Saturday, 13th April 2019, Aurostar played its second game of the tournament at the Taung Grounds, against Diacore. They knew very well that a win would put them in a good position to qualify to the next round. The second half saw Diacore evidently playing for a draw where they ballooned the balls out at every opportunity given, and ultimately catching up with Aurostar making it a 2 all draw. Aurostar now finds itself in a dangerous position of losing out on the next round of games as they have only managed to accumulate one point from the two games played so far. It had previously played Pluczenik where it lost 4-2 in a tightly contested clash.

Aurostar will battle it out with last year’s semi- finalists, Dalumi in the upcoming game on the 4th May 2019. Much is still expected of Aurostar as they still have to prove to their supporters and contenders why they are among the tournament favorites.