Next Is the Diamond Industry Really in a Crisis?
Newsletter 24.07.2019 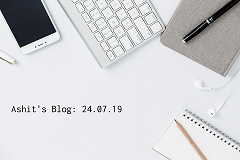 I wrote a blog on my birthday and now considering the activities happening in the diamond market, I was prompted to write again on what is actually happening in the midstream of our diamond business today before Antwerp goes on summer vacation.

This is one of the toughest times which have occurred in the last 10 years (from 2009-2019), where our industry has made biggest jump as far as the technique of manufacturing or converting rough into polished diamonds is concerned. We the midstream players had quite a good run from 2009, where the prices of rough were quite low, to have seen the peak of rough diamond pricing in July, exactly 8 years ago in 2011. This happened partly because of new bank money was flushed into the market by public sector banks of India, private banks viz. Standard Chartered internationally and bank in Dubai, who had entered the market to become an important global world diamond center, where we had seen the peak of global diamond finance of more than $15.0 billion. The interest rates in USD were at a historic low, manufacturing in Surat was increasing and market share was taken by a few companies, fueled by property price jump in a city like Surat.

On the other side, we also see China who was growing at a rapid pace of buying diamonds, which was similar to a pattern witnessed from Japan from 1982-1992, in their heydays. The purchase of polished by the Chinese retailers brought in a lot of cash and the turn of the business cycle was fast. Mining companies mined the goods and sold at good prices and manufacturers were cutting & polishing goods in Surat and selling polished to customers mostly on a cash basis. It was a good Party, but it was too good to be true, so the market needed correction, because it was trading at a speed, which was never seen in history before. The first correction of rough diamond prices started from July 2011 followed by 2015, when both De Beers and Alrosa who had quite a run on selling and who had at least 70% market share on global rough diamond sales and got all their money from banks, who were financing the trade. We also saw beneficiation in countries like Botswana, Namibia and Russia. The skill transfer was happening in all areas and better quality rough diamonds started to be manufactured in Beneficiation countries and their cutting & polishing skills were acknowledged by the world as the products were accepted. Also, new technology made manufacturing & skill transfer an easy affair, that being said; it was quite a big shift.

Surat is and was the second-fastest-growing citiy in the world, primarily due to the textile and diamond market. It had also had its own inflation, apart from its own country India. A city which had a lot of skills had started getting more and more expensive by the day. There was poaching of the workforce from one company to another, thanks to the so-called boom in Chinese Demand. Angola & Zimbabwe were also trying to mine and take advantage of the new setups created in Surat that had helped all the junior miners to have auctions and tenders, to extract top dollar from rough diamonds. Credit was available in plenty from the banks to rough dealers at lower interest rates, who passed on to the secondary buyers and manufacturers to increase their business. Everything was very good, but one knows, good things do not last very long and we saw a sudden increase in USD interest rates and banks becoming greedier, to compensate for their losses made by wrong credits given to midstream players (rough and polished).

One can see in the last five years chart, polished prices show one direction i.e. downwards. The price list of Rapaport is also not helping the market, as Rapaport follows the market pattern of how goods are sold. The cycle of manufacturing, which was earlier 60 days, has gone down to 30 days, so the need for rough diamonds in each factory is larger than what it used to a few years ago. With the new technology, we get more yield (weight) that what we used to get a few years ago. We needed more demand from consumers to buy more polished which was being manufactured by us.

As said before, in the last 10 years, there was hyper-inflation the cost of manufacturing, and what was earlier a cottage industry has now been converted into a five-star state-of-art factory. To manufacture goods and to sustain these overheads, we needed to manufacture larger and better quality goods. With the help of new money pumped in by local Indian Public Sector Banks, Indian manufacturers were able to disposeoff manufacturing setups in Belgium and Israel. This being an Export-oriented industry in India, it worked well till a few company scandals tarnished the reputation of the entire diamond market.

Talking about new innovation, in the last 5 years, Lab-Grown Diamonds has grown in a city like Surat, which is already famous for its ‘Reverse Engineering’ that means copying like how other countries have done. There is no research, just copy and make cheap machines and somehow make it work. Lab-Grown Diamonds found its way in the streets of Surat. In the initial stages, they were mixed and found their way into different markets with ‘Undisclosed Layering’. All these have boomeranged against the market. The moral value system was never so low, as it is now.

So what the traders and miners supposed to do? How to bring more profits to this trade, where we have a big expense to run the show or there won’t be any show in the future. Let us unite to have the diamond sense to make a business, which has given livelihood to millions of people across the globe.