Next Is The BDB Finally Allowing Lab-Grown Diamond Trading?
Newsletter 19.10.2019 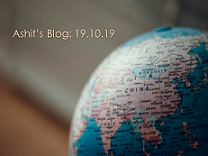 Any business in the world which has positive cash flow always gets hard currency revenue. China initiates infrastructure development and then requests manufacturers in the country to set up the infrastructure for businesses to flourish and the Chinese Government sees to it that there is a smooth running of the supply chain to the end consumer.

One such product is the natural rough diamond, which in the past 10 years has attributed to 150 billion dollars imports into India. In this, 1 million artisans have converted that rough into a finished product which is then marketed to the outside world namely – U.S. and China and to the Indian local market. During that period, China has been busy trying to develop Lab-Grown rough diamonds which would be the cheaper version of Natural Diamonds and would have an influence on the final consumers, where they will have a so-called ‘Other Option’.

We have seen a similar happening of this with mobile phones, furniture, cars, readymade garments, ships, jewelry, High-Speed trains, etc. and to be frank everything has a cheaper version of manufacturing in China which is sold to other parts of the world. By doing so, with most of the countries, China has a trade surplus like with India. A country like India has 60 billion dollars worth trade Deficit with China. This is China’s influence on the world. I see a similar trend in rough diamonds, which are in the category of Lab-Grown and the carats mined in this world, in the coming years, will far exceed the Naturals Diamonds mined. So in a matter of time, if miners and rough producing countries don’t visualize this then they will have all loss-making mines.

This will also lead to smaller mining groups losing Billions of Dollars in value, which are needed in the exploration of new mines. What will influence this trade of our man-made rough which is fulfilling the enormous capacity of infrastructure built in Gujarat over the last 60 years? Who is helping this to happen? It is all those who are involved in the trade like greedy miners, governments, trade bodies and diamond merchants like me.

I had run this thought to my industry friends to seek their opinions. One of my dear friends, Mr. Ajit Mehta who runs a jewelry unit in Antwerp (Elite Jewels) for the last 35 years, sent me his review. Here are his thoughts.

“You nailed it! China has been quietly sucking capital and job growth from practically every country in the world. It is thanks to her that there is no inflation in the world and consumers are more than happy to buy her goods.

As you rightly said, China has targeted all those products where cash flow has been strong. But on the other hand, in the pursuit of growth, it has totally neglected the human intrinsic strength. The fact that people are not allowed to speak or pursue what they want or what they feel is the biggest drawback!

Humans eventually are not robots. Each one of us has a distinctive mind and a character that he or she is born with! To kill it at the expense of the so-called national growth and a fictional GDP number is not an ideal situation. I am sure of it and I have a Chinese who works in my office who confirms that there are millions of them caught in a kind of ritual of life.  A lot of them have not moved out of their little neighborhood! That country needs a little more capitalistic culture for ordinary people rather than a few who live in Shanghai and Guangzhou.

Coming to diamonds, I strongly believe that in about 3 to 4 years, there will be an apocalypse, a disaster in the old way of workings. Man-made diamonds will replace or offset in a big way the natural. It is on the anvil. There is no way out.”

I agree with my friend Ajit here. Looking at the current state of affairs what will this mean now? It will change all our businesses as never before. Unless something drastic is done to restore confidence in the product of Natural Diamonds, it will lose its intrinsic value and credit risk among midstream participants would become insurmountable. So, Diamond World be ready for this super roller coaster ride!