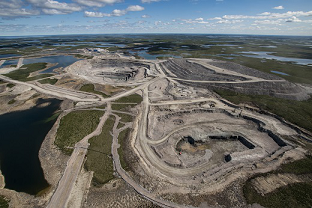 Rough-diamond prices will remain sluggish this year as the market challenges that arose in the second half of last year are set to continue, two investment banks have warned.

Prices are likely to drop 1% to 2% in the first half of 2019, before recovering to end the year flat, analyst Kieron Hodgson at London-based Panmure Gordon said this week. Prices rose 2% last year due to a strong first half, but the market slowed in the second half. In addition, a rise in mining production over the last two years has led to supply outweighing demand, especially in smaller categories, he noted.

Midstream sentiment is weak due to low liquidity and margins, tight bank lending, weak polished demand and high inventory levels, German bank Berenberg explained in a report Tuesday. The RapNet Diamond Index (RAPI™) for 1-carat polished diamonds fell 2.6% in the second half of 2018, while RAPI for 0.30-carat stones slumped 9.9%. The 1-carat index has slipped 0.4% since January 1.

Meanwhile, rough-diamond production has peaked since three new mines — Gahcho Kué and Renard in Canada, and Liqhobong in Lesotho — came on stream in 2016 and early 2017. Global output grew by between 1% and 2% to 153 million carats in 2018, and will increase slightly to 154 million carats this year, Hodgson estimated. Miners now hold larger volumes of low-value rough than they used to, he added.

Berenberg’s London branch backed the downbeat forecast, predicting flat rough prices this year and next. The supply drop resulting from mine closures in the coming years — such as the Argyle deposit in Australia, which is due to run out in 2020 — won’t lift rough prices until 2021 or 2022, Berenberg analysts Richard Hatch, Laurent Kimman and Michael Stoner wrote Tuesday.

“Between now and then, pending supply shocks, we think the prospects for material price uplifts for rough are limited,” they forecast.