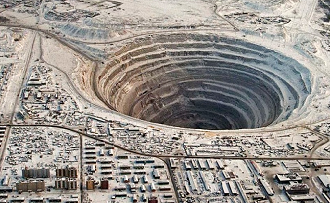 Alrosa, one of the world’s leading diamond miners has initiated a decision-making protocol that will determine if the company’s diamond mine at the famous Mir pipe is to be permanently decommissioned or fully restored.

The protocol will require deep level exploration down to -1,300 meter to confirm the mine's reserves. These activities are scheduled to be completed by early 2022. Budgeted at around US$30 million, this work is included in the Alrosa’s $430 million capex programme for 2019.

Based on the results of the exploration works, pilot holes will be drilled to start preparation of deposit opening design documents, i.e. within a period of one or two years. This work is expected to be completed before 2024. At the same time, the company will carry out conceptual design activities to ensure water disposal at the mine and choose the best mining technology as well as ventilation and gas safety options. If the restoration of the Mir underground mine is deemed feasible, reconstruction is estimated to last between six to eight years.

The Mir mine was the first developed in 1957 and at the time was the largest diamond mine in the Soviet Union. Its surface operation lasted 44 years, finally closing in June 2001. After the collapse of the USSR, the mine was operated by Alrosa, employing 3,600 workers. In the 1970s construction of a network of tunnels for underground diamond recovery began. By 1999, the project operated exclusively as an underground mine. After underground operations began, the project had a mine life estimate of 27 years, Production ceased in 2004. The mine was commissioned again in 2009.