ALROSA’s 14.83 Ct Spirit Of The Rose May Become One Of The World’s Most Expensive Diamonds 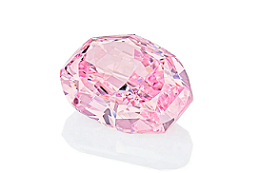 Russian miner ALROSA intends to sell its 14.83 ct pink diamond «The Spirit of the Rose» in November this year, the company’s spokeswoman Evgeniya Kozenko was quoted by Bloomberg as saying.

Eden Rachminov, the chairman of the board of the Fancy Color Research Foundation said that the stone may be worth $60 million to $65 million, which makes it one of the most expensive pink diamonds ever sold.

The Spirit of the Rose was graded by GIA as fancy vivid purple-pink with excellent clarity, excellent polish and very good symmetry, says the report.The oval crystal, which was unearthed by ALROSA in 2017, was named after the ballet Le Spectre de la Rose. Initially, the stone weighed 27.85 cts, it took Alrosa’s cutting factory one year to prepare and cut the diamond.

The representative of Alrosa’s press service didn’t comment on the estimated price of the stone but added that it will become the most expensive polished diamond in Russia, according to Bloomberg.

The company has chosen to sell diamond at a time when Rio Tinto’s pink diamond mine Argyle is depleting. It used to be the largest source of pink diamonds in the world.