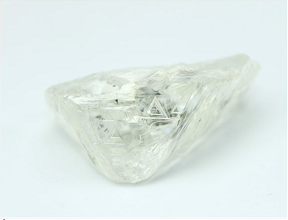 AGD Diamonds, which develops the Grib deposit in the Arkhangelsk Province, Russia, reported that on April 4, 2019, the company unearthed a 54.21 ct diamond of gem quality.

Following the company’s initiative on naming unique diamonds in order to commemorate the fact of their production and in memory of outstanding events and people of Russia and Pomorie, the mined crystal will be named in honor of the 300th anniversary of the Collegium of Mining, the mining industry management body in Russia established in 1719 on the initiative of Peter I.

The 54-carat diamond became the fifth nominal crystal of the company.

Previously, in February 2017, AGD produced a diamond weighing 181.68 carats - the largest in the entire history of diamond mining in Europe, which was called “Archangel Michael”.

In June 2018, AGD Diamonds mined a stone weighing 57.03 carats, which was named after Nikolay Koltsov - the pioneering geologist who marked the beginning of the development of the diamond bearing potential of the Arkhangelsk region in the 20th century. In November 2018, the AGD mined a diamond weighing 56.35 carats, named “Vitaly Fortygin” after one of the eminent geologists.

A diamond weighing 66.95 carats mined in February 2019 was given the name "Anatoly Stankovsky" in honor of the discoverer of the Lomonosov diamond deposit in the Arkhangelsk Province.