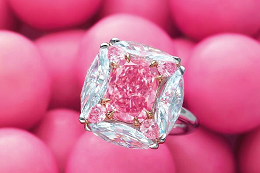 A diamond named for its resemblance to bubble gum will go under the hammer at Christie’s Hong Kong sale later this month.

The rare cushion modified brilliant-cut, 3.44-carat, fancy-vivid-purplish-pink diamond, which is internally flawless, will lead the Magnificent Jewels sale on May 28, the auction house said last week. The center stone of the ring by jeweler Moussaieff, called the Bubble Gum Pink, is surrounded by pear-shaped pink diamonds and marquise-cut white diamonds. The lot has a presale estimate of $6 million to $8 million.

Christie’s will also offer a cut-cornered rectangular step-cut, 3.01-carat, fancy-vivid-blue diamond ring. The piece, which features two heart brilliant-cut, fancy-intense-purple-pink diamonds on either side, is valued at $4.7 million to $7 million.

Other notable items include a cushion-shaped, 26.41-carat Kashmir sapphire brooch, surrounded by old-cut diamonds, estimated at $4 million to $6.5 million. A pair of Grand Muzos earrings featuring two Colombian emeralds weighing 23.34 carats and 23.18 carats, with white diamonds and pearls, will be offered at the auction for $3.8 million to $6.5 million.

Signed jewelry by Bulgari and Harry Winston, as well as a rare Jadeite bead necklace and Jadeite cabochon ring, will also be on sale.

“The striking centerpieces of Christie’s spring sales include both fancy-vivid-blue and pink diamonds, as well as one of the finest emeralds ever to come to auction,” said Vickie Sek, chairman of Christie’s jewelry for Asia. “This collection of some of the most prized gems is bound to draw strong interest from collectors around the world.”